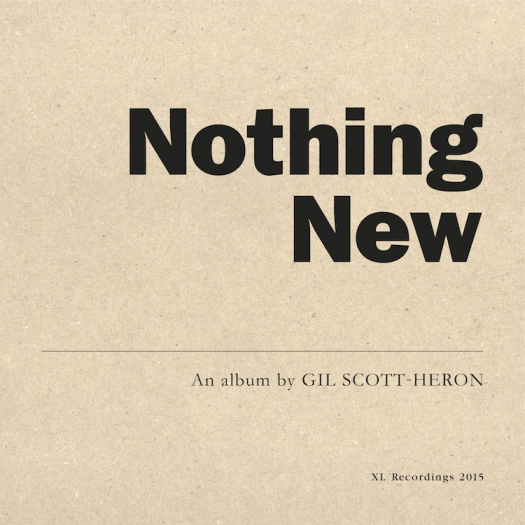 LPs do not include a digital download, you must purchase the MP3 or FLAC for digital files.

Nothing New is an album by Gil Scott-Heron of stripped down vocal and piano versions of songs from his back catalogue, recorded in New York with producer Richard Russell between 2005 and 2009. Originally released as a limited edition vinyl only LP for Record Store Day 2014, the music is now being made available digitally for the first time on April 1st 2015, in celebration of what would have been Gil's 66th birthday and a new pressing of the LP will be now available on the XL Recordings webstore.

The LP will also include a DVD of Who Is Gil Scott-Heron?, a film by BAFTA nominated film makers Iain Forsyth and Jane Pollard. Seeking to answer the question in the title, Who Is Gil Scott-Heron? is a portrait seen through the eyes of those who loved Gil, his friends, his family, and the musicians he played with. A 10 minute excerpt of the film – along with Richard Russell’s full album sleeve notes and exclusive photography – is available to view right now via the newly-redesigned www.gilscottheron.net. Screenings of the film are also set to take place in select north American cities, including New York and Washington D.C, in spring, with full details to be announced soon.

The genesis of Nothing New dates back to 2005, when Richard Russell first approached Gil with the suggestion of making a new record. Part of the initial suggestion was to record spartan versions of some of Gil’s old songs, something that both parties thought intriguing. Although recording initially started off that way, the album gradually evolved into something very different: 2010’s acclaimed I’m New Here album which, as the title suggests, didn’t touch on any of Gil’s previous recordings (except “Your Soul and Mine”, which is essentially a reimagining of “The Vulture” from Scott-Heron’s 1970 debut LP Small Talk at 125th and Lennox). I’m New Here placed Gil’s distinctive voice in a very modern context.

In November 2011, six months after Gil sadly passed away, Russell sat down to listen to the whole of Gil’s back catalogue – an incredible body of work encompassing 13 albums between 1970 and 1982, and then 2 more (including I’m New Here) that were made before Gil’s death. Listening to these 15 albums led Russell to revisit the acoustic piano versions of Gil’s old songs that they’d captured in those initial New York recording sessions. They were remarkable, entirely different versions to the originals, full of magic and simplicity.  They had in fact made the album they originally set out to.

Nothing New features these stripped down versions of some of Gil’s best (though not necessarily best known) songs, as well as excerpts of conversations between takes. The songs were chosen by Gil himself and it was only when compiling the album that Russell realised that each song was taken from a different album, Gil having carefully curated his selection.

1. Did You Hear What They Said

4. Your Daddy Loves You

9. Before I Hit The Bottom (Interlude)